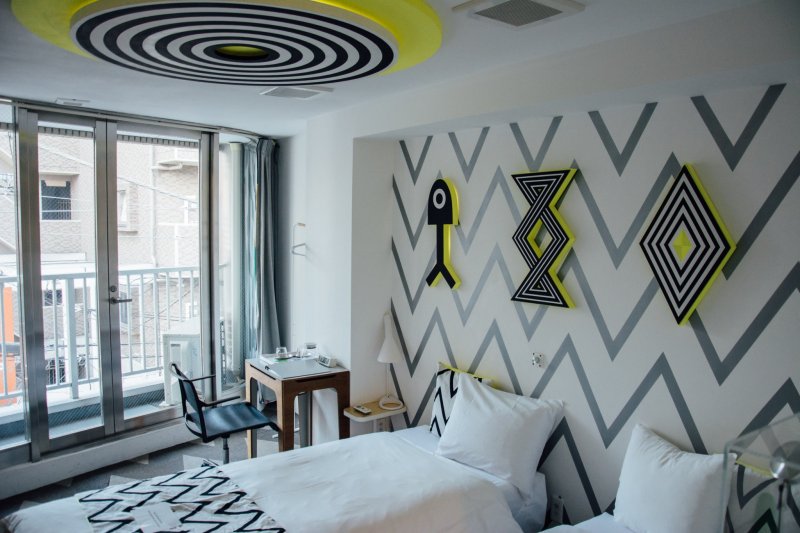 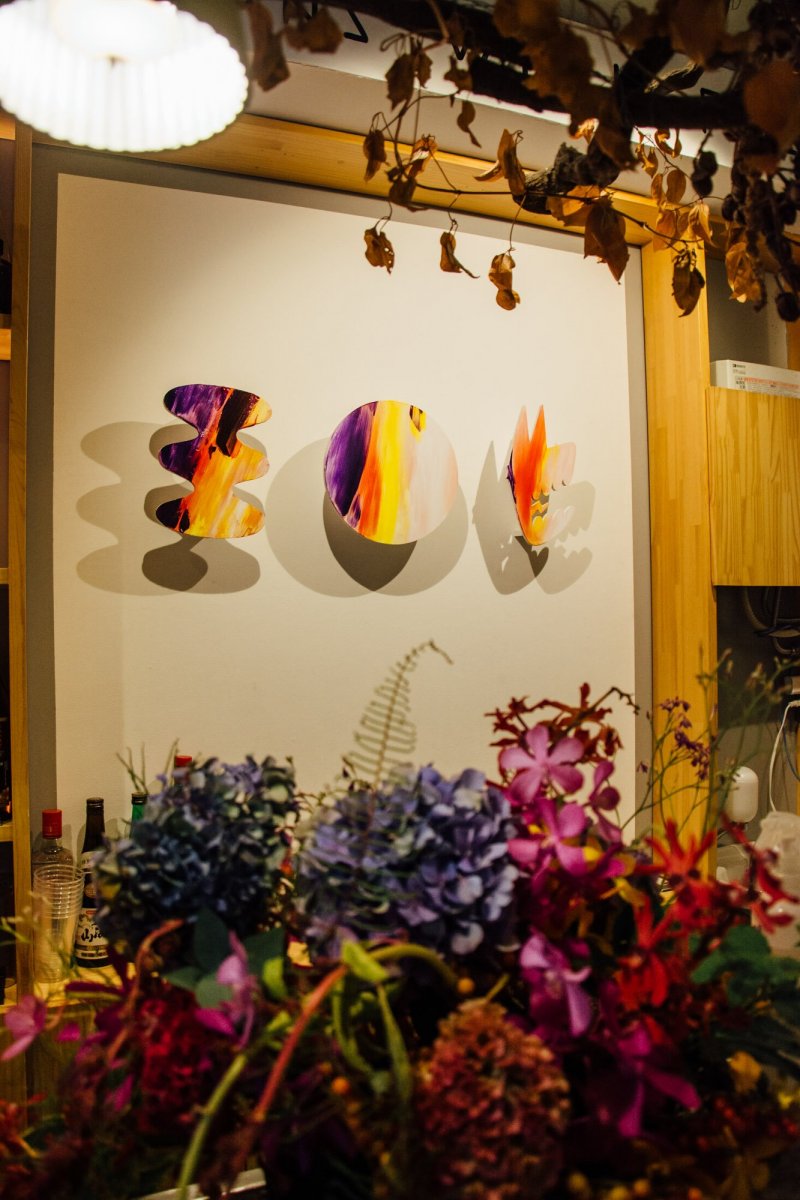 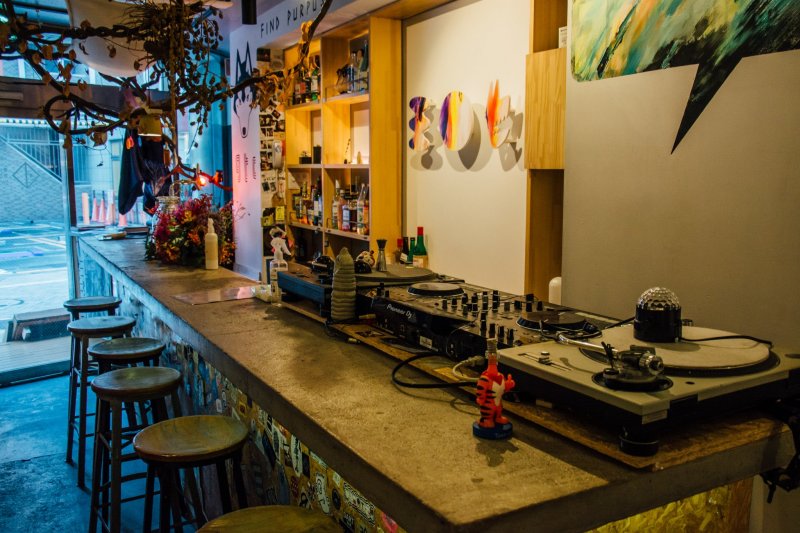 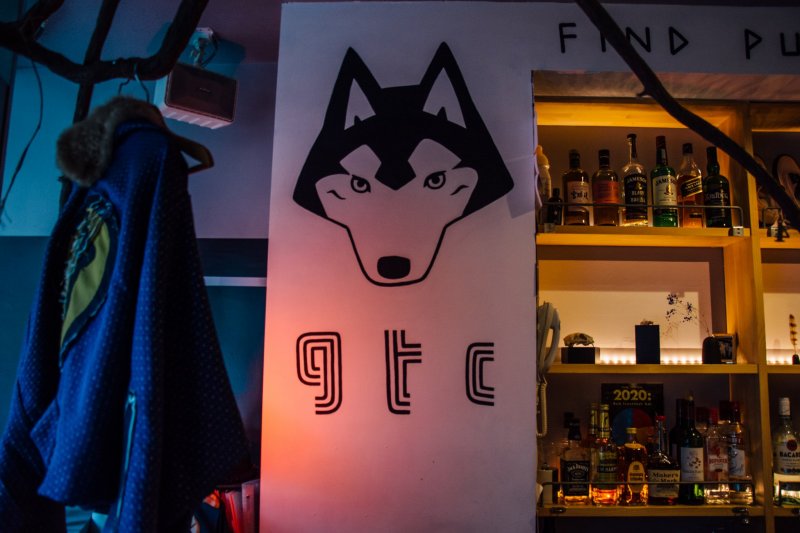 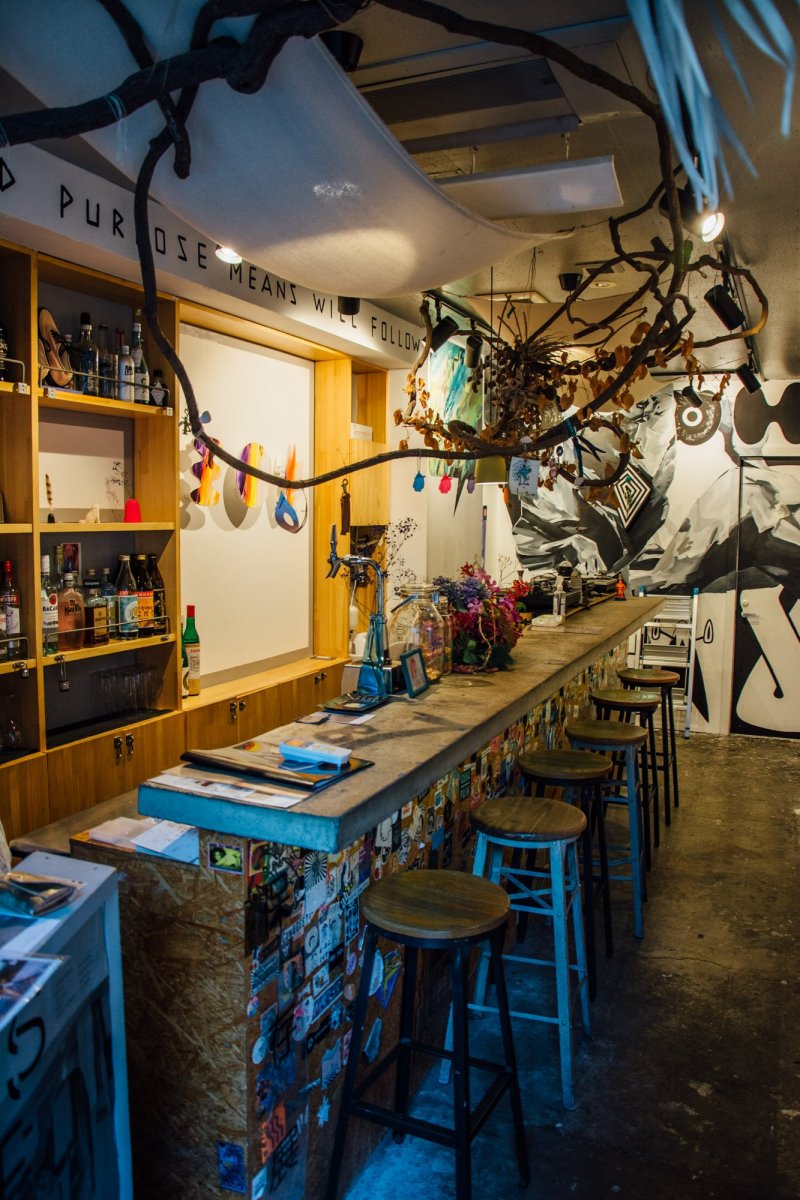 With Koenji being a "creative town" it's no surprise that the BnA Hotel opened there in 2016 and has had, subsequently, an incredible impact on the local community. BnA (Bed and Art) has other spaces dotted about Tokyo and Kyoto, but the Koenji edition is possibly more immersive as the concept is "stay in an artwork." In collaboration with local artists, the BnA has created an impressive multi-storey art experiment for art lovers and creatives with a desire to inhabit art.

The first floor acts as a front desk and bar which comes alive at night with events and selected DJs. It also hosts Masu Masu onigiri cafe with artists being asked to come and exchange artwork with each other in a gesture which reflects the true spirit of Koenji.

With two "living art" twin rooms taking up the second and third floors designed by a seasonal rotation of local artists, guests can engage with and inhabit their art rooms.

BnA Koenji also plays host to a rooftop lounge and a basement space which is used for artists residencies where their work is shown to the public and a DJ booth and streaming equipment for live performances.

With live painting events and an eclectic variety of regular events, the BnA Hotel becomes, itself, a living canvas. The BnA believes that it's a machigata hotel, meaning that guests should (and are encouraged) to interact with Koenji. Use the public sentos, eat in the local restaurants that surround the hotel and buy locally from the multitude of shops, market stalls, bars and cafes which make-up the fabric of Koenji. Feted by international press such as The Guardian, BnA acts as a creative network with the concept of serendipity being discussed as the bar becomes an ad hoc meeting place where collaborations and friendships between artists and locals are born.

The BnA was also instrumental in a street art festival named MCP (Mural City Project) which was supported by Suginami Ward. MCP was incredibly ambitious and truly communal with the desire to transform and coalesce the community through the creation of public murals. The BnA, Koenji and Suginami spearheaded a public art movement which should be commended and replicated throughout Tokyo.

Thirty second walk from the north exit of Koenji Station.

Situated a few minutes stroll from the north exit of JR Koenji Station, Clouds Art + Coffee is a simple affair reflecting the owners' passion for, well, art and coffee. Very chic and sparse, the space is compact with a fine selection of coffee from all over the world such as Ethiopia, Kenya, Colombia and Brazil which makes it the perfect spot for Tokyo's legion of coffee addicts. The owners curate a healthy mix of artwork from local and international artists and the rotational exhibition system means that regular customers have the opportunity to see, firsthand, the best and most intriguing art from Koenji's thriving art community. There's no censorship at Clouds Art + Coffee and artists are encouraged to represent themselves and their work in a free manner and this means, essentially, that customers can view an eclectic and liberating amount of art hand in hand with some of the finest coffee in Koenji and Tokyo as a whole. Clouds Art + Coffee is, ostensibly, a hub and tryst for art and coffee lovers who come from far and wide to sample international coffee made from the finest beans and art from emerging and established artists.

Ramen has become a global cuisine over the past decade with ramen-ya popping up in cities all over the globe. Millions of visitors, however, flock to Japan every year to experience the real deal. Harukiya, located a few minutes from JR Ogikubo Station, is a Tokyo institution. Established in 1949 it is the originator of Tokyo-style ramen which uses niboshi (dried baby sardines) in its broth and has been serving up first-class soy sauce which hasn’t changed for more than 70 years and has, rightly, earned it a legion of devotees. Although Harukiya has a sister branch in nearby Kichijoji, the Ogikubo store is the original and takes great pride in creating its authentic Tokyo-style chuka soba as well as chashumen and wontonmen. The aroma from the ramen floats into the outside streets having a visible effect on the patrons who queue daily to get their hands on Harukiya’s mouth-watering ramen. Popular with Ogikubo residents and foreign ramen aficionados, Harukiya has a small, curated menu with toppings, cold noodles and a few side dishes which accompany the ramen. Harukiya has led the Tokyo ramen industry for generations and there’s a reason for this. The aromatic soy sauce ramen and hand made noodles which are freshly kneaded every morning have inspired ramen lovers and ramen chefs the world over and will continue to do so for many more years to come.

One of Koenji's several bustling and popular shotengai, Look Street serves as a topographical through point between JR Koenji Station and Shin-Koenji metro station. Coming in at a whopping 660 meters, Look Street has become a destination for vintage lovers and coffeeholics, and offers a window into the world of Koenji's subcultural heritage. Look Street is tranquil and unassuming during day time and weekdays but thriving at weekends and illuminated at night creating a romantic and serene ambience. Located to the south of PAL shopping street and running straight up to Shin-Koenji, it's a real gem of a shopping district. With an abundance of vintage shops serving a myriad of styles, customers try out stores such as Lover Soul, SLUT and hidden gem Reverie Emporium for steampunk apparel and curiosities. There is also a slight preoccupation with Americana on Look Street so, naturally, suits those interested in rockabilly, 50s America and music from the last century. Try the wonderfully eccentric Pocket 57 on one backstreet. There is also a healthy selection of small, independently owned coffee stores (such as Honohono and Coffee Amp) that roast their own beans and serve a wide choice of edibles too. Whale meat isn't too popular in most countries but Koenji's Look Street has a charming and unassuming restaurant named Jinbe with a very friendly and charismatic owner. Whale meat has become something of a delicacy in Japan which has been consumed since centuries ago. Remake shops are especially popular with foreign visitors and Koenji has a wonderful selection of stores serving this thriving industry as well as handmade mask stores, souvenir shops and quirky knick-knack boutiques. It's a popular area for students and ladies looking for something special and unique to wear. Families and kids can seek a bit of tranquillity and quirkiness, something to see and something to share too. Look Street, then, is a community. A group of people sharing their passions, be it fashion, coffee or subculture. It's a warm and kind area of Tokyo and the collective spirit is very much evident in Look Street with its cheerful and helpful shop staff, chefs and community organization who take a great deal of pride in the street and want nothing else than to serve the local community and keep Look Street alive for decades to come.

Asagaya Shinmeigu Shrine (阿佐ヶ谷神明宮) is a real gem of a shrine just a few minutes walk from the north exit of JR Asagaya Station. It's also one of Asagaya's most popular cherry blossom viewing sites and the shrine holds an annual festival, Kan-okai, where dances and songs are performed by shrine members, attracting crowds of people due to its popularity. Shinmeigu also has a long history and is said to date back over 1,000 years and is dedicated to the sun goddess Amaterasu. It's incredibly spacious and picturesque and many visitors will be surprised to find such an expanse of space only 10 minutes from Shinjuku on the Chuo Line. The shrine grounds also plays host to a nohgakudo (a noh theater) where dances and performances are held. It's a stunning structure in itself but when placed inside the grounds of such an historic and beautiful shrine it transforms into something more. A mirror of Japanese culture and tradition and an integral part of Japanese history and society. Like most shrines, there are various structures and spaces used for various rituals and it's a good idea to take your time and walk and appreciate the tranquility and total beauty of Shinmeigu Shrine. Before you leave, consider buying some popular souvenirs like Kamimusubi (straps) or other limited-time items.

Asagaya Pearl Center has been playing a central role in the community for more than 60 years. With its 700-meter long and elegant main street, which resembles a pearl necklace on maps, this shotengai is studded with history, charm and community spirit. Pearl Center also hosts Asagaya's renowned Tanabata Festival which draws huge crowds every year. Asagaya Tanabata is held in August every year to coincide with Tanabata in the old calendar. With yukata-clad kids and adults, huge papier mache installations along the street and stalls selling lots of goodies for visitors, it's an important day in the festival calendar. Pearl Center is one of the venues of Asagaya Jazz Streets whose festival has taken place since 1995, attracting a lot of jazz fans each year. Peal Center has a huge variety of about 250 shops and services including boulangeries, popular liquor stores, kamaboko stores and sweets stores like Tomoean, Chimoto and Toraya. It also hosts a delicatessen popular with foreign customers and a few mobile phone stores which also help non-Japanese residents and tourists with the complexities of setting up a mobile phone or SIM card. There are also stores dealing in kimono and wagashi (traditional Japanese sweets) which seem to be growing in popularity with foreign guests. A close-knit community with an old-school atmosphere, Pear Center is a welcoming location with an adult atmosphere. Families and children love the peacefulness and charming store owners who have been situated there for decades. Pearl Center serves its community well and with its array of retail and dining opportunities and quaint atmosphere it's no wonder that it's held in the hearts of many Asagaya locals.