A miniature Shirakawa-go in Gifu Prefecture

The rural village of Shirakawa-go, with its UNESCO World Heritage thatched roof homes, is one of Japan's most iconic sites. For those who don't have the time or opportunity to visit, however, an alternative is available in the onsen town of Gero Onsen, just south of the popular mountain town of Takayama.

Gero Onsen's Gassho Mura (Folk Village) sits at the top of the city overlooking the surrounding hills. The homes on display were all transported from Shirakawa-go, when a proposed dam site required that a number of the homes be disassembled and moved. Among the homes that were relocated and saved were the historic Odo House and the Banko-an house. Today, the Odo House showcases a display of traditional agricultural tools as well as paraphernalia related to the cultivation of silkworms, a popular enterprise in many of the thatched roof houses. There are also small displays of traditional clothing and household goods, though the information provided is only in Japanese. The Banko-an house cannot be entered itself, but it's worth venturing over to the far side of the park to see the home's waterwheel and unique frog shrine.

If you're in the mood for something hands-on, the folk park offers short workshops where you can paint ceramics or make your own washi (traditional Japanese paper). For a diversion of a different sort, don't miss out on a performance at the Shirasagi Puppet Theater. Traditional Japanese shadow puppets are used to retell folk tales against vividly painted backgrounds. While the stories themselves are narrated only in Japanese, a short synopsis of each tale is provided in English. Performances are held several times each day; simply check with the ticket staff at the front gate for show times.

One of the best times to visit the Gassho Folk Park is in autumn, when the area's maples are turn a fiery shade of red. Despite the beauty, you the park's admission keeps out the hordes of photographers.

The Gassho Folk Park can be reached from Gero Onsen's train station in a 20 minute walk (all uphill). If you don't feel like tackling the incline, there is a shuttle bus that runs from the station to the park once or twice an hour. You'll find it just opposite the train station. 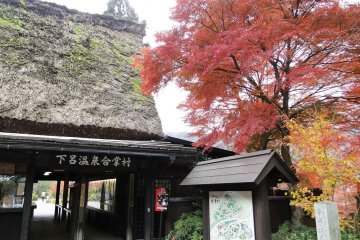 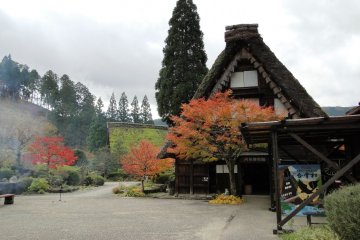 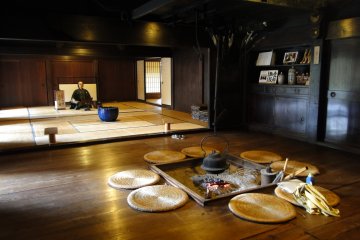