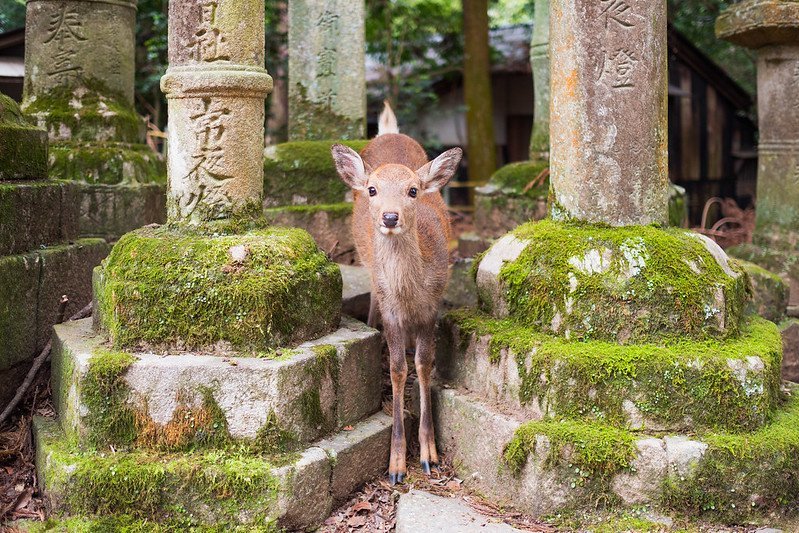 Nara Park is located just around 5 minutes of walking from the JR Kintetsu-Nara Station.

NARA Visitor Center & Inn is located by the Sarusawa Pond in Nara City, a short walking distance from Kintetsu Nara station and Nara station. It is the hub for all travel resources when visiting Nara. If you have any questions, need travel recommendations, or are looking for transportation guidance this is the stop to make. The visitor center offers services that will ease your travels in Nara. Find an ATM serving overseas cards and foreign currency exchange at the service counter. Drop your bags off at the baggage storage to rid the excessive weight off your shoulders as you explore the nearby areas. The travelers lounge is equipped with computers and i-pads available for use free of charge. If they are taken, use the free Wi-Fi, to start planning your adventure on your own devices. Find pamphlets and maps for basic information and tips on where to go. The multilingual staff are also extremely helpful and are happy to share the must-see sights and eats that you will not find in travel pamphlets. In addition to the many services offered here, you will find daily walking tours and free cultural activities to participate in. This is a great chance to learn and experience the art of Ikebana (flower arranging), dress in a Tempyo gown, or challenge yourself with Japanese calligraphy. Take the free excursion buses available every Tuesday, Thursday, Saturday and Sunday until October 31st, for a ride to either Asuka Village or Mount Yoshino. The famous sights and activities are not limited to Nara City so don't miss out on this opportunity to explore all the beauty Nara Prefecture has to offer!

Toshodaiji Temple, located just north of Yakushiji Temple in Nara, is a significant site related to the development of Buddhism in Japan and signifies a connection between Japanese and Chinese cultures. The prestigious temple was founded in 759 by the Chinese monk Ganjin, who traveled to Japan in 754 after being asked by the emperor to help train monks and improve Japanese Buddhism. After retiring, Ganjin was granted land and consequently, established Toshodaiji to continue teaching Chinese Buddhist principles. Today, the temple is recognized as a UNESCO World Heritage Site. Without a doubt, Toshodaiji’s most impressive structure is its Kondo, or Main Hall, which was reopened to visitors in 2009 after nearly ten years of reconstruction work. The one-story Kondo, situated directly behind the Nandai-mon (Southern Great Gate), is the epitome of early Japanese-Buddhist architecture with a tiled sloping roof, seven bays, columns, and dark wood tones. Due to the building’s columned facade, it is often compared to the Parthenon. Inside, the hall houses principal Buddhist statues, which are designated as National Treasures. Standing before the hall, you cannot help but be swept away by its commanding presence. Near the Kondo is the Kodo Lecture Hall. This structure was originally built as an administrative building for the Nara Imperial Palace, but later relocated to Toshodaiji after it was gifted to Ganjin. Today, the hall is the only surviving building of the palace, and thus, a historically significant and rare part of the temple. Another prominent temple building is the Miei-do, which enshrines a famous wooden sculpture of Ganjin that his disciples created using hollow-core, dry-lacquer techniques. The exclusive building is only open to the public for a few days a year around June 6th. For all other days, visitors can view a replica of the statue, which was made on the 1,250th anniversary of Ganjin’s death, on display at the nearby Kaizando. In the eastern woods of the precinct lies Ganjin’s grave, one of the most tranquil areas of the temple. Follow a nature-laden path through thick foliage and then cross over a small bridge into the peaceful haven. Toshodaiji is also home to monk sleeping quarters, storehouses for sutras and treasures, and the Koro (Shariden), which is the site of the Uchiwamaki Ceremony, or Fan Scattering Festival, on May 19. Be sure to visit this remarkable temple and walk the footsteps of one of the most influential Chinese monks of Japanese Buddhism.

Yakushiji Temple is regarded as one of the oldest and most important temples in Japan, which is no surprise given its impressive status. The temple is recognized as a UNESCO World Heritage Site, the headquarters of the Hosso Sect of Buddhism, and one of the Seven Great Temples of Nara. Emperor Tenmu founded the temple in 680 and dedicated it to Yakushi Nyorai (the Buddha of Healing) to aid his wife—who later became Empress Jito—in her recovery from an illness. Yakushiji was originally located in Fujiwara-kyo, but later moved to Nara in 718, where it still stands today. Although all of the original temple structures, except the East Pagoda, were lost to fires, the temple’s present-day reconstructions accurately reflect its traditional and grand design. Today, visitors and students of Buddhism flock to the site for spiritual learning, healing, and prayer. In addition to the main temple buildings listed below, Yakushiji is home to Yasumigaoka Hachimangu Shrine, other traditional halls, and Buddhist artwork and artifacts. Do not pass up the opportunity to visit Yakushiji’s distinguished temple grounds and immerse yourself in the sacred and educational atmosphere.