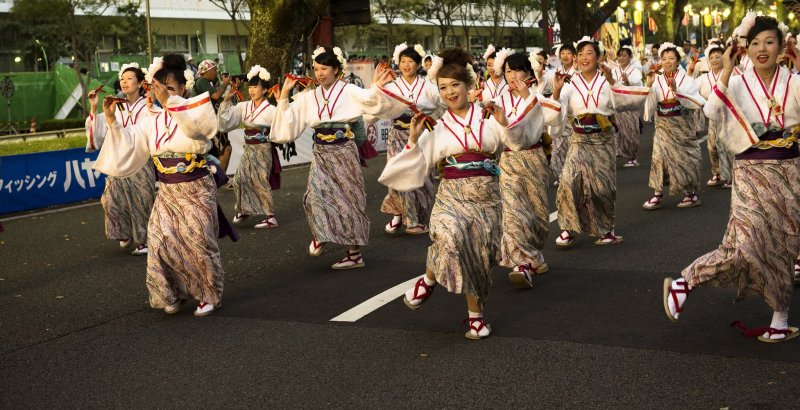 Summer is prime time for big festivals in Japan, and Kochi City is no exception. The highlight of the local year is a three-day dance/parade extravaganza in August, called ‘Yosakoi’. What the word means exactly is open to interpretation, but the general sense is ‘let the good times roll’, and there’s a strong hint of, um, nocturnal naughtiness to it. During the Japanese holiday, obon, over 10,000 dancers in many dozens of teams throng the main streets and thoroughfares, beating time with small wooden clappers called naruko. The costumes are colorful and fantastic, and a highlight is the decorated trucks which head up each team, staffed by hard-core carnival party animals and blasting out music from their huge speakers.

Every team is free to arrange its own style of music from Japanese ballad to big-Afro funk, but it must include at least part of the festival’s official song, the “Yosakoi Naruko Dance”. Things wind up with a grand parade down Otesuji-dori Avenue and a huge fireworks display, lasting 90 minutes.

Especially good dancers proudly wear ribands awarded by the judges, and there’s an overall winning team each year. Teams are organized by companies, businesses and localities, and a lot of them are put together by izakaya – informal pub/restaurants, which Kochi City center is packed with. A festival is really a way for a town to bare its soul and show the world what it’s made of. I’m always impressed by the way Yosakoi displays the quintessential character of Kochi City – it’s loud, gaudy, cheerful, ever-changing and irreverent, with the women of the town definitely front and center.

Dancers come in all skill levels and ages, and they’re free to change teams every year if they choose. In addition, dancing styles are not predetermined, and the serious teams spend most of the year choreographing and practicing the next year's dance routine.

This kind of free-and-easy style might be frowned upon in other Japanese cities, but Kochi (as always) gives a broad grin and goes its own way. You’ll never see the same Yosakoi twice, and you’ll definitely never see a dull one. Let the good times roll!

I've been living in Kochi since 2006. I enjoy taking every chance I can to ride my bicycle, camp, swim in rivers, relax on the beach, and explore the surrounding mountains -- all of which can easily be done in Kochi. We're out of the way, but worth it.I'd love to connect with you on Twitter @Koch...